How to Reach Your Audience With Digital Advertising 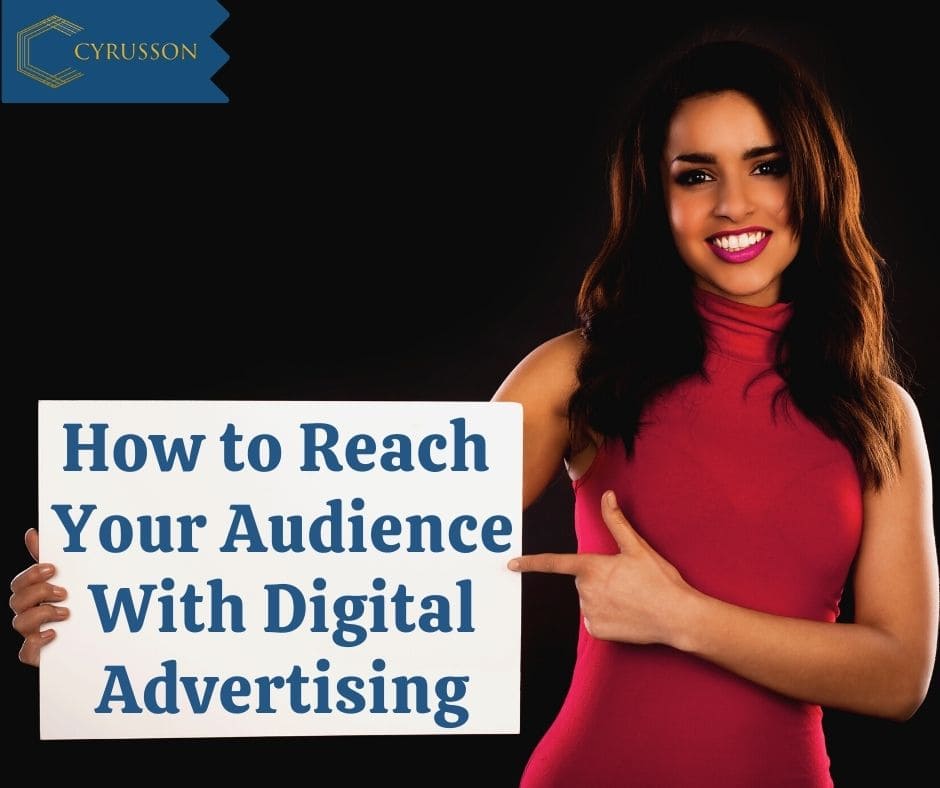 Digital advertising comes in many different varieties, including display advertising (those web banners next to your favorite Youtube videos), sponsored ads (such as those on Google and Facebook), and of course, search ads—just to name a few!

So where do you start?

While there are so many online options to choose from, reaching your intended audience will still require a little bit of work. Luckily, using digital advertising to get your message across is easier than you think.

In 2008, only 24 percent of the United States had a social media account. Today that number has skyrocketed to 81%. While traditional mediums such as television and newspapers still have their place, most companies are turning towards digital advertising for the majority of their needs—and who could blame them?

As of 2016, tech titans Google and Facebook together control over nearly 76% of total internet revenue growth. Furthermore, in the third quarter of the same year, Google and Facebook together controlled 99% of advertising growth, with this number projected to be on the rise). So why would you settle for anything but the best? Pick the right digital platforms and go where you’ll be seen.

Knowing your target demographic is undoubtedly one of the most beneficial tools in your advertising toolbox. Why? First off, not only does it give you a leg up for reaching the most likely people to buy your product or service, but it also helps to pick the appropriate platform and technology to deliver your message. But be warned. Once you have their attention, there’s still plenty of work to do!

To push all the right buttons, advertisers need to know exactly what to say. Great content moves people—and in turn, products. It keeps audiences engaged, entertained and coming back for more!

Did you know? The average clickthrough rate of display ads across all formats is a measly 0.06%. From the moment that first browser opens in the morning until that last cat video before bed, internet users are bombarded with dozens of digital advertisements. By the time they get to work they’ve seen so many digital ads that they’ll likely only remember one or two, if that.That’s why it is vital to have the most creative content on the web to achieve that long sought after CLICK.

When YouTube celebrities Rhett and Link rattled funny bones as the ‘Commercial Kings’ in the late 2000’s, they were an instant hit. Their witty (and often outrageous) videos generated millions of views for small businesses. How, you ask? By parodying cheesy retro-style TV ads. And while you don’t have to break out into 90’s jingles and fake mustaches, you can win over big crowds by being entertaining, and authentically you. So go against the grain and dare to be different!

As the internet continues to advance, media is consumed differently. More and more people are getting their entertainment and news from streaming options such as Netflix, Roku, Hulu and YouTube. So what does this mean for digital advertising? Interaction! Interactive ads get a higher clickthrough rate of around 6 percent, whereas most digital ads remain at a fraction of one percent.

Good advertisements tell a story that engages the audience. If you’re a restaurant owner, enticing future customers with a snappy ad no longer cuts the mustard. But when you intrigue potential buyers with an eye catching video, a hilarious one-liner or a captivating call to action, you give them autonomy. Don’t tell customers what to think, but instead show them why buying your product is the best decision.

Keep it short and sweet

Don’t say too much! Short messages that pack a wallop and avoid cliches go a long way in the digital advertising world. Hook readers in with a memorable joke, a one liner, or a quick play on words.

Tug at their heartstrings

When Coca Cola launched their Remove Labels campaign it gave audiences a friendly reminder not to judge someone by their looks, but by their words. And whether your message is sensitive or funny, at its core it should come across as authentic.

Today’s audiences are smart and expect more than basic pandering. They want engaging content that scratches beyond the surface of a product and relates to them on a meaningful level. That’s why today’s most memorable campaigns reject tradition in exchange for something more sincere.

While traditional word of mouth will always impact local business, the trick is to give them something positive to talk about. The most important thing about your digital advertising campaign should be about connecting with your audience. A little passion goes a long way.

Successful digital advertising plucks viewers’ heartstrings and entices with humor. It takes you on an emotional roller coaster by conjuring up feelings of forgotten memories and nostalgia. Most importantly, whatever your approach, be sure to make an emotional connection with your audience—leave them breathless and standing in awe, or contemplative with the warm fuzzies. Make your digital ad memorable and appealing, and thereby your brand. Remember, if you think your message is fun and entertaining, so will your audience! If you need an experienced advertising team to manage your digital ad campaigns, feel free to reach out!